Welcome to the World of Aeora!

What is the World of Aeora?


The World of Aeora is a website dedicated to collecting all of the resources for my fantasy setting (or world) of Aeora. There is a wide variety of poems, stories, maps, and artwork that you can look through to better understand Aeora. If you are looking for a place to begin, then try reading my current Tales of Aeora collection.


My blog has free downloads, and articles, that you can read for fun at any time. If you are looking for something new to read, or a fantasy world to escape to, I'm sure you'll find a home here. If you are a subscriber, you'll get exclusives and early access to new content. Please note that using my assets for commercial use is never allowed.
Latest Post
Aeora AMA Archives Art Artwork Avendale Beta Readers Characters Comics Creatures Discord Emilia fantasy Games Giveaways gothic History Luna maps Medeva Misc. Misram news newsupdate PDF Poem poetry Resources Tales of Aeora Templates Thereb Videos
Twitter Facebook

The last raindrops fell on Medeva’s face as she curled up beneath the tree whose branches saved her from the storm. She couldn’t tell whether she was still crying. The roar of the whirlpool began to dull as the storm passed and the waves, once licked the tops of those cavernous islands, drained far below the marker of encrusted mollusks around each stone cliff. Medeva peered to the north and southwest and saw islands, much like her own, standing like city-sized, stone pillars above the retreating sea line. Baring her glance down the plateau was a blanket of jungle flora which danced like shadows in the purple-light of the storm from an hour earlier.

Now, however, she could make out the fat fronds of several dwarf palms, and a wide assortment of ferns decorated with vibrantly-colored seeds and flowers. Medeva stood up at dawn, when Solarus’ first beams stretched over the hazy, shimmering sea horizon, and cast’d a final glance hoping Emilia and the Kraken would bob, miraculously, into view. But they didn’t. Medeva slung her pack over her shoulder and slipped the golden elixir into her pant’s pocket, after a brief debate over whether to throw it into the ocean, and said a prayer to Luna before wiping the final tears from her face.

As Medeva approached the jungle, she noted that a thin mist bent to follow its outline across the plateau and flickered with semi-opacity in and out of the sunlight. She followed its tail with her gaze, down a valley, and when she looked back into the trees Medeva nearly jumped. There was a person standing between the ferns, past the mist, with her face half-obscured by the shade from a palm frond. But Medeva recognized the jetblack hair, the emerald eyes, and breathed, “Emilia?” as the priestess turned to run.

Medeva didn’t have time to think. She followed.

“Where are you going?” Medeva shouted. Emilia never looked back.

There was a chuckle that could’ve been the breeze. Light filtered through the jungle canopy and cascaded on the forest floor like emeralds or autumn leaves scattered by a fairy queen’s careless dance. Emilia slipped around the corner of a pygmy palm. The thick odor of smoke stuck to the air. Medeva rounded the corner, but Emilia wasn’t there. Instead a bluebird and a small bonfire in the center of a hidden grove. Medeva felt surrounded by the towering branches of a few sycamores which dominated the clearing and dwarfed the surrounding cycads. The bluebird cocked its head as she approached.

“Where did she go?” Medeva asked.

The bird paused, as if seeking an answer, then chirped happily as it flew into the bonfire. Medeva cringed as the creature dropped among the embers, its body writhing as the fire danced agreeably until it withered into a pile of ash. There was no stench. Just the smell of smoke.

Medeva jerked when she heard soft laughter above her head. There was a man lying on a branch with his feet propped against the trunk of a tree, at least fifteen feet up, his right hand holding a jagged dagger across his chest. A maroon gem, like a sparkling droplet of blood, decorated its grip. His skin as pale as Luna’s surface, but his hair brighter than the fire reflected in his dark brown — black? — eyes, alluded that he was not entirely human.

“Tricky creatures,” he said, “They only speak in metaphors.”

“Where are you going?” he asked.

“Seems a rather common predicament.”

“You see, people spend too much time thinking about where they have been.”

“Without a doubt. Maybe you should think about where you are now.”

Medeva’s eyes grew wide. She chuckled and shook her finger at him, more firmly than she intended, and turned to leave. She took two steps.

“You know you won’t be able to get back,” the man said.

Medeva stopped. “What are you talking about?”

“You’re not in Aeora anymore,” he said, shrugged, and swiveled to face the fire. “And, wherever we are, it turns out that we don’t just get to leave.”

It was as if a lamp had suddenly turned on. “No, no, no,” she breathed and ran back to the cliff-face. But, on her way, she could hear the conviction of the man’s laughter echoing through the treetops. When she got back to the spot where she’d entered the forest, she found that there was no longer a cliff overlooking the vast ocean — but only a small, placid pond in the middle of a forest. There were no streams to fill it and no reflections in the water, as if it were sustained by an unnatural force.

An assortment of trees, and vines, hung over the water’s edge and dipped their leaves into the unreflective surface where every so often a few bubbles would emerge from the mysterious depths. Transfixed by the shadowy gloss of the water, she stared off until the sun had moved midway through the sky.  At least there is day and night. She sat on the embankment, pulled out her book of shadows, and a quill that she had somehow managed to keep. She didn’t have any ink (and hadn’t thought to grab any coals from the bonfire), so she used the only thing she could think of and dipped her quill into the golden elixir.

Then, she started to write. 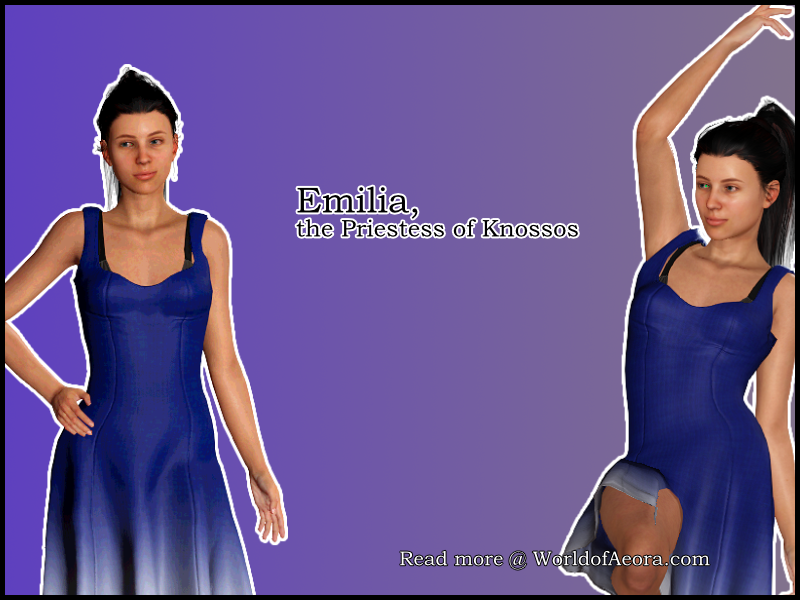 Emilia was born on the island nation of Elithrea to the goddess, Helle, and a mortal man. From birth she had exceptional powers that no one was able to explain. and (after Helle left the planet) was quickly sent to train with the mysterious priest and priestess of the sacred city of Knossos. She quickly climbed the ranks and could read the Secret Language fluently by the time she was seven years old. By the time she was twelve, they had promoted her to one of the highest ranks that a priestess of Knossos can attain. It was clear that she was a gifted child, so throughout most her early life she was given gifts and recognition -- such as the three soul gems that she keeps on a chain wrapped around her wrist; yet she was not happy and left the island of Elithrea and joined up with a group of smugglers in her efforts to explore the coastlines of the world. Eventually she traveled to the Freelands and met her own half-cousin, Medeva the Sorceress, and helped her flee the city of Ratio-res.

build a wall of condensed smoke

sparks of electricity will dance in jagg’d

upon oily waves that rip

past the curve of her brow, reflects the storm

into sheets of flashing rain. Broken

weathered by the widening current, rise

under water in an explosion of tidal waves,

veers into the spiraling current

by a mysterious force.

Gazes up at the sky, her view blocked

She looks for the priestess,

through the veil of rain and wind

the silhouette of a rising spire

center of a maw swallowing

of the ocean into an endless…

clenched, sure that this will be when

into rows of angry, jagged teeth

until, on the horizon, that peak

shadows of a dying light;

writhing in the tumult of the sea,

beast, hissing and spitting at

sky. And, for the second time,

bite of the forbidden fruit…

colors, and a tree

off the edge of a cliff.

open on the rocks.

Left behind, she watches

as the rest of the

Please note that all of the content on this blog is property of the creator / owner, and cannot be used without express, written consent. Any people, places, or events are products of the author's imagination and any semblance to real, or actual, events is purely coincidental.