Translated from the ancient language of Kemeti in 42 A.D.

Ancients claim Phrixus was brother to the

reflected, showed although he floated far

away that he was not alone. Luna,

the eldest sister, sat by earth between

the two, watched as each cratered body bloomed.

and filled the night with stars and earth’s oceans

with waves, flooded the lost cities of Yis

and Lyonesse in her colossal grief –

of ash and sulfur tore apart the sky.

Helle -- died in rising tides, and tears, to

live with stars in space. First war had waged, the

twins prepared for fate – the day was coming

when they would no longer have to wait. But

Luna and Solarus knew a secret:

spun harmoniously – worlds once grew in

shadows cast by spheres in opposition.

But knew, as well, Phrixus could not rest. His

return all but certain on that day when

Heavens spiral the mouth of a whirlpool in predetermined rotation -- paper

boats, by weak sails, bob on rows of rippled teeth cut from the night sky, fill’d with dim stars.

Medeva spent her days among the sailors as they traveled closer to that tree Luna foretold years ago. She remembered, with sick nostalgia, the man who became Jason the Dread — but before, on the day of their wedding. She could almost feel the wisps of golden hair between her fingers when she held his cheek and kissed. Steady grasp on her lower back as she pulled her husband from his feet, closer to her lips, her own hair like thick fur held back in a bun with six, silver needles. On the island of Numitehm lived few people, even though the beach was overripe with ferns and seagrass, and the rest of the land grew crops beyond abundance. Most of the yield decomposed below the bushes in late summer, attracting fruit flies and gnats to the fields. Numitehm was Jason's home before he turned sixteen and married the sorceress, Medeva, who was four years his elder. He pined after her like a child, infected with an obsession to study her as if one of his notorious experiments. The smell of saltwater and constant bob of the Kraken reminded her of that island.

Every night she peeked out the porthole, half-expected to see his ships following them across the Seventh Sea. Although she never saw them, Medeva often thought she heard the blare of a horn over the roar of the wind and waves. This afternoon, however, she tried to relax while the sailors walked the deck, half-dressed, and chewed their herbs which enlivened them with Emilia's spirit — kept them company despite miles of empty, blue rolling, repetitiously, day and night.

Their captain, Hoffman, was supposed to govern the smugglers, but confined himself for several days to his cabin. The crew saw him rarely and, late into the night, whispered that he communed with a shadow behind his locked door. “He was a remarkable man once,” they claimed, “people from the First through the Seventh Sea knew his name — Hoffman the Enlightened Alchemist — but fallen from glory he sits in his room, explores the last frontiers of his mind.” Medeva heard about Hoffman through her adolescence, his name collected on more than one scrap of paper within her Book of Shadows. She re-read his legends and desired to speak with him, but he never came out of his cabin. The first mate, Stoll, said Hoffman was in deep meditation. “No one may disturb the Captain until his trance is over,” Stoll responded to Medeva’s inquiries, while Emilia was ever accessible.

Before dusk the crew would always light two, iron braziers and place them on one side of the quarterdeck. Emilia stood between the flames at sunset, saying a prayer in a language that Medeva didn’t recognize, while other members of the crew watched her in reverent silence. Medeva thought that was all there was to it but, the third time she watched this ceremony, she realized Emilia would retreat to the lower deck with several of her closest followers. So the next night, Medeva waited until it was late — when it was just her, the stars, and the moons — and she used a special key (one of those strange artifacts she’d stolen from the Society of Alchemists) to unlock the door to the lower deck.

She found herself in a narrow, dimly lit passage that stretched into a staircase leading deeper into the hull of the ship. There was a foul smell in the air that reminded her of a cistern. As she started down the steps, she heard the shuffling of creatures below her feet. For a moment she hesitated, until she heard the clacking of hooves and the low bleating of an animal. Medeva stepped on to the bottom of the staircase and saw that the lower deck was made up of several animal pens. Inside were a variety of livestock, mostly different boar and a few pekrem, that were being transported from the mainland of Kemet. A few of the pens were empty and, looking down at the floorboards, Medeva could see dried pools of blood beneath her feet. The pekrem stared intensely as she passed.

At the other end of the deck was a wooden, lattice-work hatch, at least nine-feet across, leading nowhere except a short fall into the dark, choppy waters below. There were spears on the walls surrounding the hatch (expertly crafted and decorated with large, colorful feathers), and a large porthole that allowed one to look out into the ocean that trailed behind the ship. Normally this would have brought Medeva comfort, because she could reassure herself that Jason wasn’t following them, but tonight all she could see were the three moons of Aeora, and the inky surface of the sea — and no one could have seen anything through that impenetrable shadow, but Medeva thought she could make out the tail of a serpent, in the distance, crawling its way back into the abyss…

The next day the Captain remained secluded in his cabin, and Emilia was also unusually absent. At mid-day Medeva (finally) spotted the priestess staring far-off into the distance at the bow of the ship, her eyes locked on the seemingly infinite, blue horizon as seawater sprayed around her in a fine mist. Medeva walked the upper deck to join her, and looked past the blanket of shifting sea water. “How come you didn’t say anything to the others?” Medeva asked. Emilia didn’t say anything to Medeva either, for a time, and when she did speak it was as if the words were coming out of a distant grotto.

“Do you ever have visions?”

“Do they ever cause you fear? Show you things that none should know, except those who have passed on to eternal sleep?” Medeva had been given warnings, advice, and prophecies — but the secrets of the dead she’d never perceived.

“I’ve seen a storm,” Emilia continued, “surrounding cliffs overlooking a whirlpool. Sea foam sprays mountains with violent waves and turns their stone foundations to sand. Day becomes night under a breadth of lightning speckled storm clouds, a ship dances toward the center of a hungry maw. Sea serpent can’t resist the pull of spiraled waters, plunges deeper into jagged trenches than the lost shell, and algae, covered relics of Yis.” The sky where she looked was clear. Not a cloud obscured the evening as it aged into regular, waning light.

“No,” Emilia said and rubbed the gemstone spirals at her wrist. The sapphire and ruby glowed on either side of the dull emerald, twin flames flickering to the beat of thunder in an unseen storm. “This is what Helle has said must happen.” 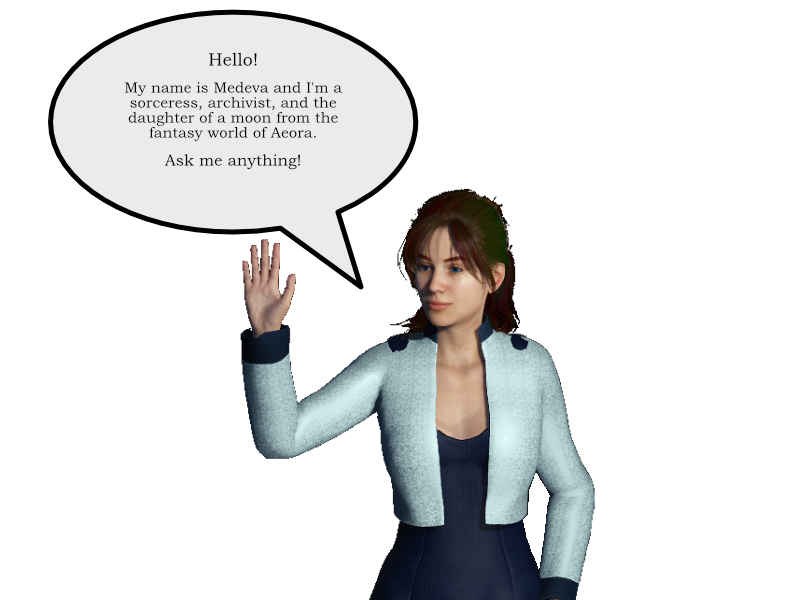 New event from the World of Aeora! Ask Medeva anything in the comments below and I'll make a comic of her responding to you. If you like my 2D comic style better, then let me know and I'll answer in that format instead. Thank you and have fun! 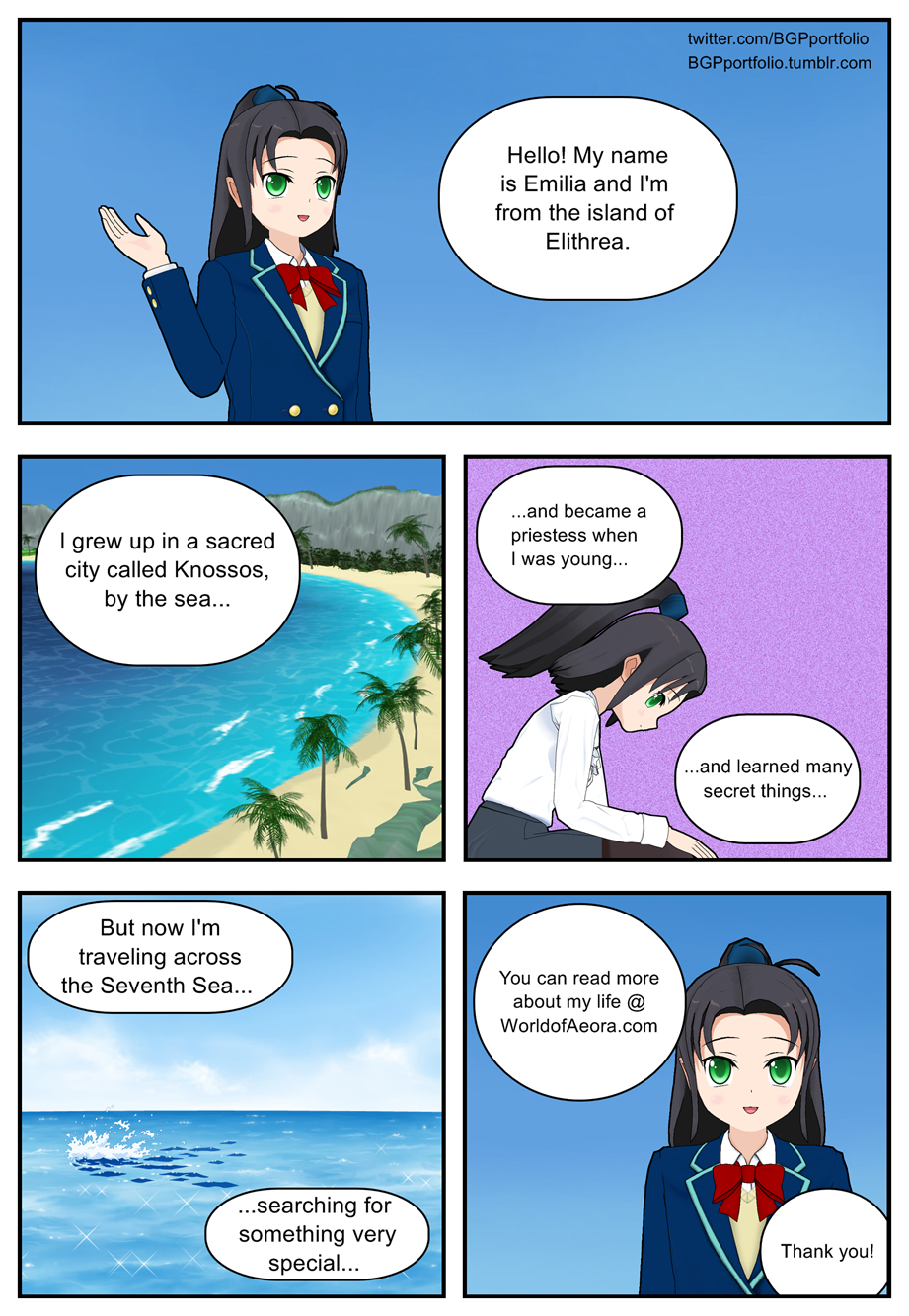 Just a little introduction comic that I made for Emilia, the priestess of Knossos. 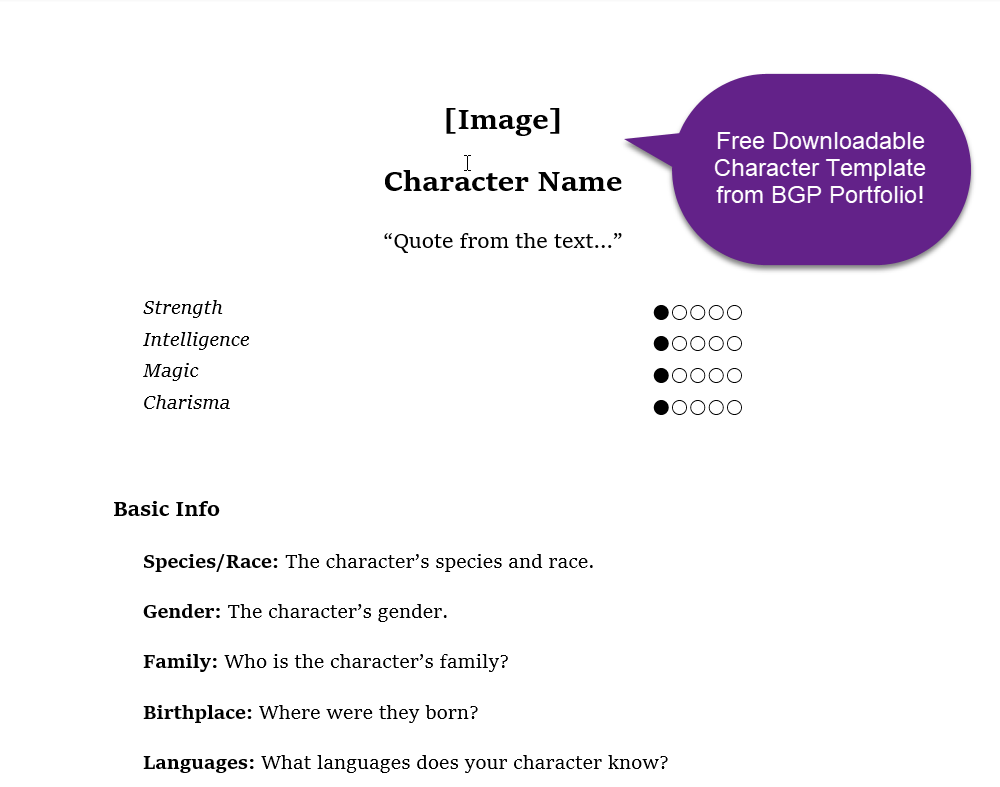 World of Aeora, Character Template #1 (Ver. 1.0)
I've decided to release the current version of the World of Aeora character template, as a Word document, in case anybody would like to use it for their own characters. Please feel free to use this template in your free or personal projects. You may use this template commercially, but if you do then you must credit BGP Portfolio and link back to this site.
I hope this template ends up being as helpful for you as it has for me!
Newer Posts Older Posts